Diane Leigh, aka Fledling on fire, and author of Dream Seed Magic, has just started her Little British Tour which runs until July. To mark her first week enjoying the delights that Britain has to offer she tells us of another journey, and how that taught her that you appreciate more when you have less. 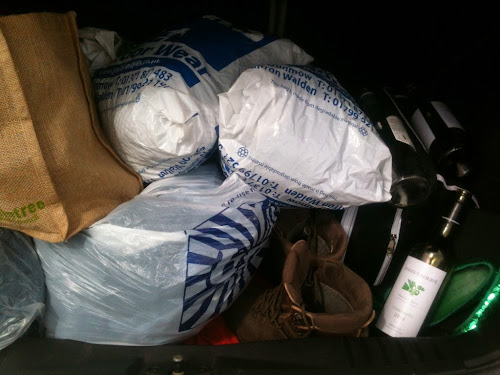 It was in Paris, during my second apartment move in a month in December 2012, that I became stubbornly resolute in my determination to reduce the number of my belongings. “How could one person have accumulated so much stuff?” I kept lamenting to myself.

With my former life packed sardine-style into two storage crates in the UK, I skipped off to Paris with just one suitcase in January 2011, to live the first dream of my life. I was 40. Two years later I was paying for excess baggage to return to the UK, even after having given and thrown away so much stuff, to live a new dream – to create a location independent lifestyle. The 100 things philosophy threw fuel on the fire in my belly.

My chosen challenge was to reduce my belongings to 100 things in 11 months by the end of 2013. Plenty of time I thought, until I stood in the storage depot with both crates open before me, stuffed with stuff. Stuff I couldn’t even remember owning, stuff in duplicate, triplicate, multiple, stuff without purpose, meaning or value. Just stuff. “How could one person need so much stuff?” I wailed. Of course, I didn’t need a single item of that stuff. For two years I had paid every quarter to store this stuff.

Research into the official 100 things philosophy was unnecessary for me, common sense told me all I needed to know. I chose my own ‘rules’ and challenged them regularly. My mission was simple, minimalist freedom.

Bewildered, overwhelmed but undeterred I began. With an unknown starting count, I often sat on a dusty box with a cup of tea and wondered what 100 things would look like, what I would be left with, was it even possible? As the financial rewards of selling my stuff increased, I almost didn’t dare consider how much money I had spent to amass all this stuff. It was unimaginable. A methodical and systematic process, it was not without chaos and disarray. For weeks I would awake each morning to be greeted by boxes looming over me in my bed like the Mafia of Stuff. I sorted instinctively with minimal thought into five bags or boxes: to be sold, to go to charity, to be recycled/go in the bin … to become one of my 100 things. Any wavering or weakness was sent into a fifth box. The theory being that if it was out of my sight and mind, if I missed it I would go looking for it. But I didn’t. As time passed, the decisions became easier as I became more confident. I rose to the challenge of thinking outside of the box, dual purposing or making do without. Eventually, a white man with a van, several car boot sales, an eBay Trading Assistant and a specialist seller later, and I could list my 100 things by my deadline of 31st December.

My 100 things short list looked back at me proudly. Being the owner of the least number of things in my life felt good. In fact, it felt fabulous! My sense of achievement, of succeeding with the challenge was dwarfed by the discovery and realisation that I didn’t need things to feel secure, happy, alive, to focus on my priorities, to follow my values or beliefs, to live my dreams.

Nomadic wanderings were now wagging their tail with excitement, I could now focus on my next project and dream, my little British things Tour, 13 May – 31 July 2014.

Once I had changed my thinking, my actions, behaviours and destiny followed eagerly. Even shopping and purchases became more considered, more savvy, became less. Minimising is like an infectious disease, impossible to contain. Declining unwanted, unnecessary carrier bags in shops, leaflets, free magazines and gifts has become automatic. Since achieving 100 things, I have continued to pare back. Now my heightened and more mindful awareness of each and every item in my possession enables me to recognise more clearly than ever what has value to me, what I love, what I need. Less is most definitely more! More space, time and energy, more money, ease and action, more living, loving and giving. More people. More gratitude and more abundance. My Just ONE philosophy had just been established. But maybe we’ll leave that story for next time …

With Love, fledgling on fire xx

Fledgling on fire (aka Diane Leigh) is author of the memoir of her story Dream Seed Magic ~ A Journey Beyond My Imagination. Look out for her wanderings on her little British things Tour 13 May – 31 July, 2014

Our Snippets & Musings newsletter subscribers get early access & special offers, and when you sign up you get free printable planner pages & a bullet journal habit tracker!

Get featured on our blog!

Click the image or here to fill in our survey and feature on our blog.